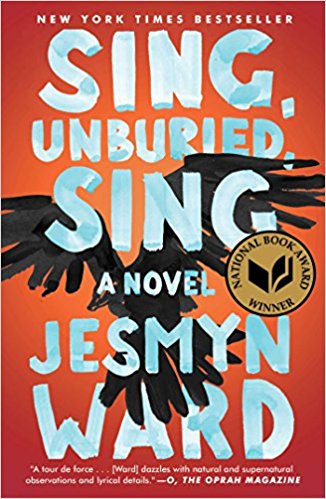 Sing, Unburied, Sing is a brutal coming of age story set against the backdrop of rural Mississippi. This was a very mediocre story for me and I found myself continually checking to see how much I had left to go…which is never a good sign. I wasn’t ever able to fully immerse myself in the story or characters. There were certain moments where I was “there”, like during some of the scenes on the road trip you could really feel the oppressive heat and the weight of the situation pressing down on Jojo. Otherwise I felt very separate from the plot and characters.

Part of my issue with this book and one of the things that kept dragging me out of the story was the inconsistencies with characterization. The author made a very clear artistic choice with dialect in the very beginning of the story. We are thrown in with a very heavy southern dialect of a young, uneducated child, fine..cool..here we are. Then constantly throughout the story these characters wax poetic using large complex sentence structure and vocabulary that is so inconstant with previous characterization. This leaves the characters with a lack of authenticity and you can feel the author pressing in on the story. This left me disconnected with the characters and I felt a total lack of investment in their fate. Then we have the whole thing with Jojo being a parent to Kayla as their mother is not present or able to care for them. This missed the mark a bit for me as we spend time with his interactions with Pop and Mam. There are details of how the children have cared for by their grandparents and their relationships are really quite sweet. They have been fed, sheltered. loved and taught by them. Yes interactions with his drug addicted parents would have caused Jojo to grow up faster than normal, and would have brought him closer to Kayla and wanting to shelter her from them. Jojo and Kayla had parents in Mam and Pop, to the extent that he no longer viewed Leonie as a parent. So moments in the story just rang false to me, and were contradictions of previous characterizations.  One of the largest examples for me was River allowing Leonie to take the kids on the road trip in the first place. This just didn’t make any sense to me, the character of “Pop” that was created throughout the story would not have allowed that to happen, and Leonie perpetually unable to standup up to anyone or for anything in the rest of the story would not have been able to stand up against River and take them anyway. It made it feel like there was two totally separate stories happening. There are so many examples throughout the story where the dots just don’t quite connect.

Lets move on to plot. To me there seemed to be just a bit too much going on. The changes in plot and conflict didn’t seem to flow together and some points were just dropped and forgotten altogether.

Then there are the ghosts…ah the ghosts. I get what was trying to happen here….maybe?? Some of our characters are haunted by their pasts. Leonie by the death of her brother and her desperate need to see him again coupled with her guilt over having a relationship with the family who murdered him. Using this as fuel and a reason to get high. River by the events of his past and the guilt and responsibility he feels over the death of someone in his care. We see how these hauntings of the past effect their present interactions with their families especially the children who can literally see these ghosts and interact with them. Then it gets a little weird with the magical realism at the end. I feel like we should have spent more time with Mam and her relationship to the Gods and her gris-gris throughout the story, or just skipped it all together. It made the whole story feel a bit cheap by the end to have this weird supernatural event surrounding Mam’s death. Wasn’t for me.

The ending seemed very truncated to me. All of the conflict seeming to be solved and so many story threads just dropped without explanation. This was a very lukewarm read for me, but us well loved by others. There is lots to discuss about it…so there is that. What did you think?